Sunbeams have an obscure system of sail numbering that in many cases is no indication of the age of the boat.

The first 30 boats, built between 1923 and 1926, were numbered sequentially.  However, in 1927 the Solent fleet at Hamble River Sailing Club decided to renumber its boats sequentially ignoring the, by then, 9 boats built for Falmouth.  So for many years there were duplicate numbers.  Furthermore, boats that ceased racing with the Solent fleet were stripped of their sail numbers which were re-allocated to other boats, so when a prodigal son was welcomed back it was necessary for it to be allocated a new number!

Following the disruption of the war, and austerity of the post-war years, the fragmented Solent fleet was, by 1965, coalescing at Itchenor Sailing Club.  This facilitated a constructive dialogue with Falmouth leading to the creation of a unified class comprising two administrative divisions.  Whilst sail numbers were rationalised the opportunity to restore a chronological sequence was not pursued.

The tables,  available below  in pdf format, depict  the timeline of each boat showing when it was built, its position in the chronological sequence, its movement between Solent and Falmouth, and changes to its sail number. 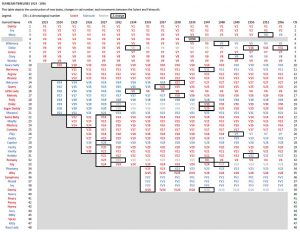 In 2011 the partnership was suspended when the two divisions were unable jointly to agree to a change to the rules permitting epoxy/glass sheathing of the outside of the hull, proposed by Solent.  However, cordial relations have been maintained.  In 2016 the two class captains sailed together at Itchenor, and in the following year a group of Falmouth sailors were welcomed there for a most enjoyable weekend of sailing and social activities.