Mast heel positions
Sunbeams originally had a fixed mast position formed by the square heel of the wood mast engaging in a square recess in the mast step created during the building process.  When the rig was re-designed around 1970, some boats experimented with the mast further aft which required a new step to be fitted.  More sturdy steps were also introduced to  protect the local hull structure against distortion by mast loads.  A variety of bespoke arrangements came into being depending on who was responsible for the modification.  The advent of aluminium masts with heel castings straddling an inverted-T section step introduced further variance in the heel position to the point that no-one really knew anymore where their mast was stepped relative to other boats.  During the 2016/17 lay-up period a project was instigated to measure the position of the mast heels of as many boats as possible, the aim being to bring about closer racing by eliminating heel position as a source of advantage or disadvantage.  More boats are being added during 2017/18.  The results are presented in the chart below which can be viewed and downloaded as a JPG file.  Since these data were gathered V5 and V31 have reported moving their masts closer to the norm, and seeing a perceived benefit in performance. 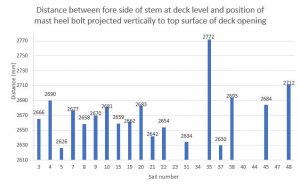